Port Douglas was awarded a small victory against bike thieves this week, with members of the community coming together to help recover six stolen bikes from a creek bordering a vacant lot on Endeavour Street.

Among the unfortunate victims of the spate of recent bike thefts was PD Bikeworks owner, Thor Stovell, who reported five hired bikes stolen around October 3. On October 5, locals Linda Vos and partner Daniel Hough were among the owners of three bikes stolen from the Port Douglas Road resort carport.

According to Port Douglas Police Sergeant Damian Meadows, bike theft is one of the biggest crime issues in town, and Ms Vos said she’s aware of numerous bikes stolen over the past few weeks from various locations, including major resorts.

After the theft of Ms Vos’ and her partner’s bikes, she posted photos and an appeal for information on Facebook.

“I received one response from another local, who had three bikes stolen over three weeks,” she said.

“He was so nice to take it home and notify us,” Ms Vos said, explaining Mr Bourgignon found her $500 mountain bike behind a large electricity box on the vacant lot.

“At the back of the lot runs a creek, in which at least two bikes are in the water, so this seems to be a dumping site for the local youth to get rid of the bikes that they steal for either fun or just to get home,” she said.

“We have informed the police, and they will liaise with the Council to try and get the bikes out of the water. As the creek is connected to the estuary, there could be crocs in there, plus the side of the creek is quite steep and about two meters high.”

Mr Stovell saved Council the trouble, visiting the creek himself to try and identify the submerged bikes. He hauled eight bikes from the creek, where visibly, some had been submerged for quite some time.

“I saw a bright green colour through the tea-coloured water. That’s what indicated where [the bikes] were,” Mr Stovell said.

“The bank was quite steep; I had to use a grappling hook to recover what turned out to be two of my stolen bikes. I thought I saw something else in the water, so I kept casting out and ended up getting six more.”

Mr Stovell said yesterday the police recovered another of his stolen bikes, in addition to the two in the creek, but there’s two still missing. He said he doesn’t know who owns the other six bikes he found in the creek, though one bore a sticker from another local bike shop.

“Clearly, they’ve obviously ridden down that end of town, and then disposed of the bikes,” Mr Stovell said, adding he had informed local police of a potential lead. Sergeant Meadows confirmed police were pursuing a line of enquiry.

“They seem to think it’s their God-given right to help themselves to someone else's property,” Sergeant Meadows said.

“[Thieves] might see it as just someone's bike, but that may be the owner’s only mode of transport. Bike theft has a substantial impact on peoples' lives.”

“We have chosen not to buy a car for financial reasons (we are saving for our wedding), and now that our bikes have been stolen, we are faced with whether or not to replace them, as we’re leaving town in six months,” Ms Vos said.

“Helmets, bike lights and code locks are gone as well. Just to replace them would easily more than $120 each,” she said.

As a small business owner, Mr Stovell is losing income from the thefts.

“The two returned bikes are still not serviceable or hireable, so I’ve got four bikes effectively that can’t be hired – that comes at a cost to my business,” he said.

“It’s not just the loss of the bike, it’s the hassle too. I spent an hour and a half digging the bikes out of the mud at the creek.” 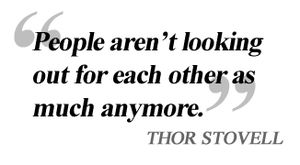 Mr Stovell said the local bike thefts all have something in common.

“The stupid thing is that none of [the stolen bikes] were locked. The people that own the bikes need to be more responsible. If you lock them, it’s very rare [to have them stolen]. It’s a simple thing.

“I get people in here nearly every day saying, ‘My bike was stolen.’ I ask, ‘Was it locked?’ and ‘Do you know the serial number?’ and they answer ‘No’ to both. They often haven’t memorised the brand or anything.”

A Port Douglas resident since 1999, Mr Stovell said times have changed when it comes to securing personal property.

“Back then, you could pretty much leave everything and know no one was going to steal it, but the world’s changed,” he said. “People aren’t looking out for each other as much anymore.”

“If [the bikes] were sold or something, you can maybe understand it. But dumping them in the creek, I don’t think any of us will ever understand.”

“It seems like there may be people out there taking pleasure in stealing and trashing other people’s bikes without considering any consequences,” Ms Vos said, adding there needed to be a greater awareness.

“You cannot just take someone else’s property for fun without any consequences.”

“It’s indicative of the mindless nature of the perpetrators,” Sergeant Meadows said, advising owners to take the appropriate steps to secure their bike.

“Don't be complacent, even if you're only going into a shop for five minutes, lock it up.”