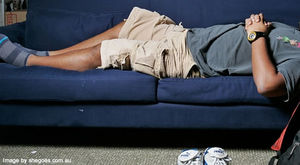 A Douglas Community Housing Group Homelessness Report has found that up to 200 people are homeless in the Douglas area on any given night.

A series of recommendations were tabled at Council level earlier this week as a result of the report, with CRC identified as having a major role to play in implementing these recommendations.

The report outlined eight recommendations requiring Council involvement such as the facilitation of a road show of homelessness services from Cairns to Douglas.

The objective is to gain a clearer indication of living conditions within the Douglas area and to provide relevant support networks based on existing needs.

According to the current Australian Bureau of Statistics (ABS), the Douglas region has seven rough sleepers, 16 people in temporary housing/dwellings and 42 people in crowded dwellings.

Pictured: Couch surfing for extended periods is considered a form of homelessness.

Anecdotal evidence collected during the development of the Homelessness Report indicates that there may be as many as 200 people homeless in Douglas on any given night. This number captures all levels of homelessness.

In addition, the report identified "that the majority of organisations in the Douglas region are providing homeless services even though they are not funded to do so."

And these services are being stretched the limit.  Over a six month period, four key agencies in Douglas had contact with approximately 550 clients that sought advice or assistance with housing related issues.

There is one Indigenous housing service which has a charter to work directly with homeless Indigenous people in Douglas. This is mainly self-funded.

Access Community Housing, located at Westcourt in Cairns, has a total of 30 units for transitional housing located in Port Douglas, Mossman, Cooya, Newell and Wonga. As at 15 October 2012 they were all tenanted.