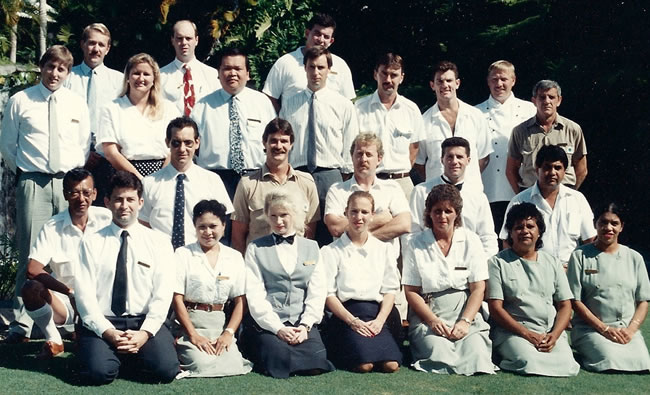 The people who made the Sheraton Mirage Port Douglas the best resort in Australia are reuniting to celebrate the icon's 25th birthday.

Despite the milestone not officially taking place until October, staff who worked at the Sheraton between 1987 and 1990 are gathering for a private function back at the resort at the end of August.

And such is the place the resort has in the hearts of those who helped built its reputation during that period, former employees are travelling from as far afield as England to celebrate, including the company's second ever employee on the books, chief engineer Jerome Van Gramberg.

"We're hoping to have about 100 there and numbers are still climbing at this late stage," said reunion organiser and former Credit Manager for Sheraton Mirage, Joanne Nicholson.

"It was this real bond (between staff), to be part of something so magnificent. The reality was there wasn't much around so it was just a real community, a family who lived, ate, and played together."

Ms Nicholson said the sheer size of the resort meant that it was impossible to invite the thousands of employees who have been part of the Sheraton Mirage since it opened in 1987.

"It would have been great to open it to more but probably 10,000 people have been employed there in the last 25 years."

If you worked at the resort between 1987 and 1990 and would like more information on the reunion, contact Joanne Nicholson at smpd25live.comau for details.